Marcus Reis is a first-year Ph.D. student in the Leibfarth Group at the Department of Chemistry, here at the University of North Carolina at Chapel Hill. Earlier this year, Marcus was one of the Leibfarth students who partnered with the Wonder Connection, a non-profit, one-of-a-kind program that provides pediatric patients with a connection to the natural world via hands-on natural science activities. Based at the UNC Botanical Gardens. The Wonder Connection has strong ties with UNC Children’s Hospital, and focuses on bringing science and nature to children who spend a long time in the hospital, receiving or recovering from treatment. Children, who otherwise would not be able to experience these things. The organization visits patient’s rooms, bringing supplies to make slime, kinetic sand, vinegar & baking soda volcanoes, and a host of other fun, educational, hands-on experiments.

“Marcus and Ollie came up with the idea to create a robotic arm, powered by hydraulic syringes…”

In addition to visiting patients at bedside, the Wonder Connection also hosts “Science Nights” at the Ronald McDdonald House for patients and their visiting families. The Leibfarth Group has actively reached out in collaboration with Wonder Connection, hosting a number of these evenings, also and participating in “Visiting Scientist” events at the hospital.

Part of the Leibfarth group’s outreach includes long term mentoring of patients who are more regular visitors of the hospital, and it was in this capacity that Marcus was paired with Oliver, or “Ollie” as he likes to be called. Together, Marcus and Ollie came up with a plan to create a fun long term project for other kids in the hospital; one that they could complete while receiving and recovering from treatment. 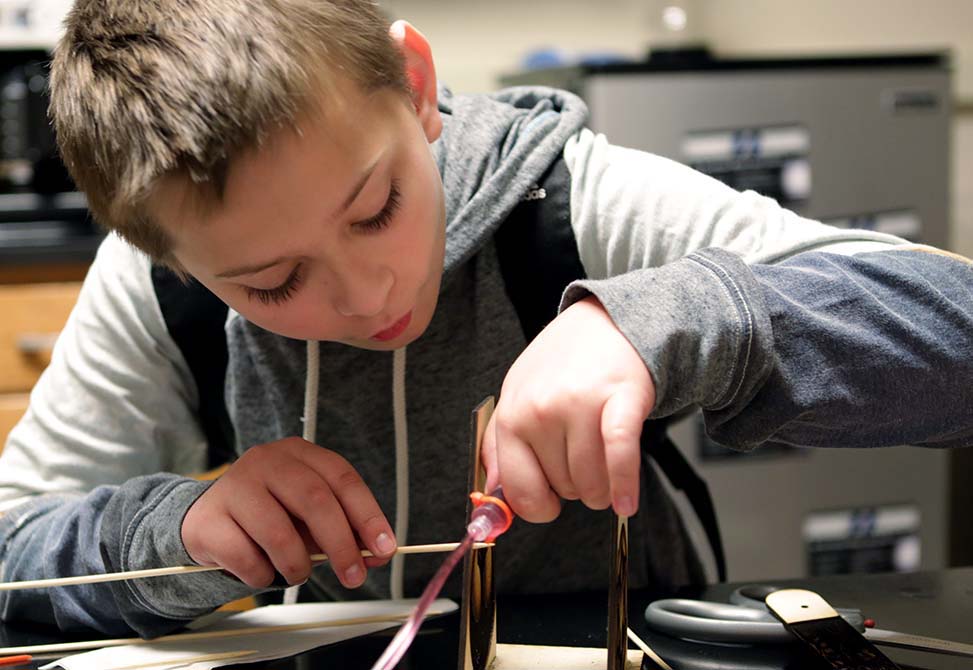 While the Wonder Connection has several short, fun activities with which pediatric patients can interact, Katie Stoudemire, the group’s founder, mentioned to Marcus that they lacked a project that would occupy more time. Marcus and Ollie came up with the idea to create a robotic arm, powered by hydraulic syringes, something they had seen in a video on Facebook. The video was time-lapsed, provided no instructions or measurements, and the crane was made of flimsy cardboard. So, Marcus and Ollie began making prototypes. The first turned out to be “a floppy mess,” made from cardboard and kebab sticks. However, with help from assistants at BeAM, they came closer and closer to a better working prototype.

Science Librarians at the Kenan Science Library makerspace were helpful in creating the prototypical crane claw, an item Marcus and Ollie found plans and designs for online. The two of them are now using makerspace 3D printers to replicate this crucial element, and laser cutters to create the main pieces of the arm from thin plywood. No more flimsy cardboard. Marcus and Ollie are making parts for approximately ten robotic arms, kits they will later deliver to pediatric patients, who hopefully will have fun both putting them together and playing with the finshed product. It was Ollie who suggested incorporating designs and characters from StarWars in the final design. In the accompanying images, you can see him and Marcus putting together “Crane 3.0, one step closer to the final product.”

Marcus and Ollie working on one of their prototypes